Chronic Traumatic Encephalopathy is a progressive degenerative disease of the brain found in people with a history of repetitive brain trauma, including symptomatic concussions as well as asymptomatic subconcussive hits to the head that do not cause symptoms. CTE has been known to affect boxers since the 1920’s (when it was initially termed “punch drunk syndrome” or dementia pugilistica).

In recent years, reports have been published of neuropathologically confirmed CTE found in other athletes, including football and hockey players (playing and retired), as well as in military veterans who have a history of repetitive brain trauma.

CTE is not limited to current professional athletes; it has also been found in athletes who did not play sports after high school or college.

The repeated brain trauma triggers progressive degeneration of the brain tissue, including the build-up of an abnormal protein called tau. These changes in the brain can begin months, years, or even decades after the last brain trauma or end of active athletic involvement.

Further information is available at the CTE Center’s website: www.bu.edu/cte/ 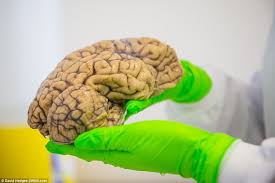